In a world where the holidays are more commercialized than ever, it is refreshing to see people give back. We’ve seen Miley Cyrus and Justin Bieber donate their time in recent years, but what about other celebrities? While we can always count on our favorite stars to be generous with us during this season of giving, there aren’t enough names out there! With that said – here are some celebrity fan films you should check out for THIS holiday season!

The “new fan films” are a new type of film that has been created by fans. These films can be found on YouTube and other streaming platforms. 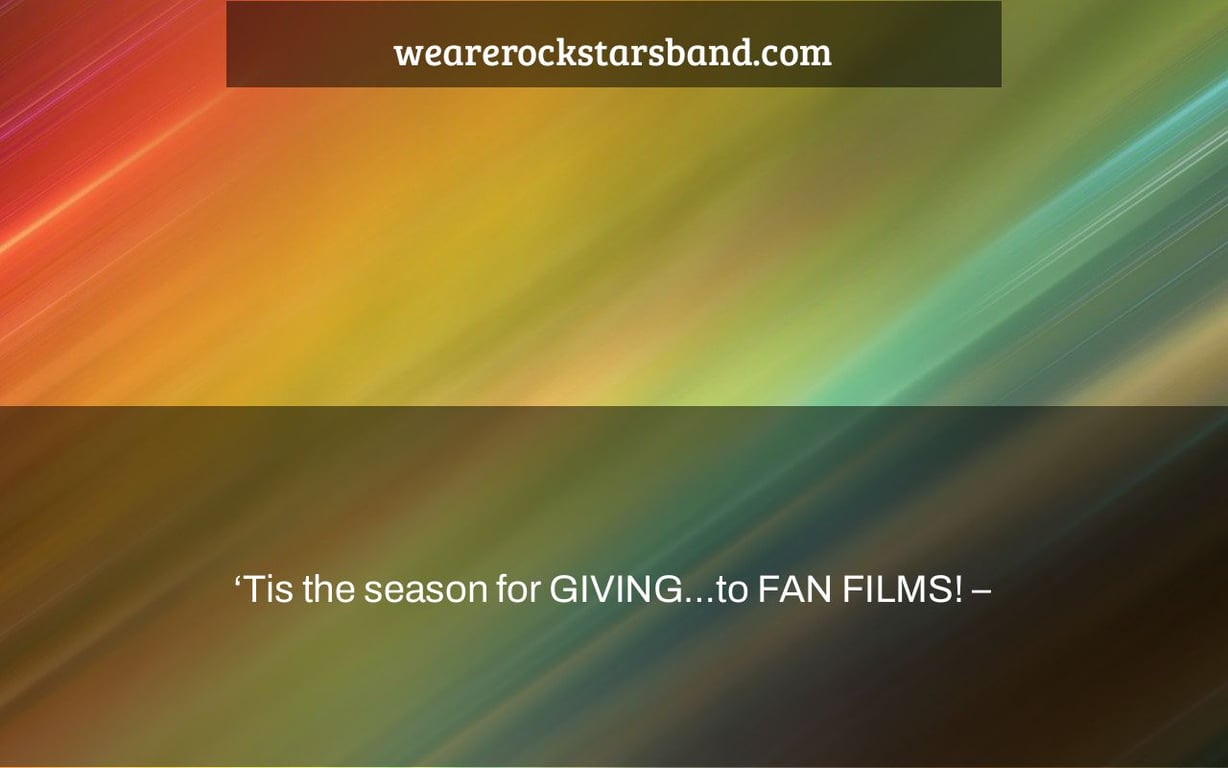 When people ask me for tips on how to crowdfund their fan projects, I always advise them the same thing: DON’T START YOUR CAMPAIGN DURING THE HOLIDAY SEASON!!! Since 2015, I’ve found that fan film crowd-funders attempting to seek funds between November and December often fall short of their targets, if not outright fail. For fan films, the Christmas season seems to be a “contribution desert.”

It makes perfect sense. Almost everyone is purchasing presents for friends and family for Christmas (or Hanukkah, Kwanza, or Festivus). People used to take costly trips around the holidays to see relatives or just get away before COVID—remember when that was the case? Charities, of course, use Christmas as an opportunity to appeal to the giving spirit and ask (hopefully) generous individuals to contribute a little something. And before you know it, Christmas bonus cheques are being spent before they’ve ever been received, and bank account balances are sinking like the Titanic.

I understand… This is not the time for fan films to seek funding.

However, on Monday, I got a slew of e-mails from a variety of sources notifying me that “Giving Tuesday” had arrived. So, it seems that we now have Black Friday, Cyber Monday, and… Tuesday is giving day, right? When did this become to be a thing? Actually, it began in 2012 at New York City’s famed 92nd Street Y (where I attended summer camp in 1981) and has since developed into a worldwide movement to promote a bit healthy charity among the frantic bargain-hunters.

Because I recently underwent cataract surgery early this week, I wasn’t able to post a blog in time for this year’s Giving Tuesday because I couldn’t read the words on my computer screen for a few of days. Today is the first time I’ve had stable vision long enough to write a blog.

I’d been meaning to make a post alerting people about the current Patreon campaign to help me pay the costs of maintaining this blog site. At the moment, monthly contributions are sufficient to cover the expenses of domain registration and hosting, technical assistance, and security services.

However, I just added an additional yearly expense: a $160 Zoom Pro Account. You may have noticed that I’ve started doing more video interviews with fan filmmakers in recent months. Zoom is a convenient method to communicate with numerous individuals and record interview conversations. Zoom is also free if your call is under 45 minutes long or has just one other person on it. My interviews, on the other hand, last 60-90 minutes, and I often have numerous individuals on at the same time.

So, with “Giving Tuesday” approaching, and despite the fact that we’re in the midst of the “fan film contribution desert,” as I refer to it, I figured now would be a good time to remind you about my Patreon…

I’m seeking for $1, $2, or whatever people can spare on a monthly basis to assist pay the yearly expenditures of…

But then I remembered all of the other crowd-funding campaigns now underway, each of which is worthwhile in its own way. Two MAJOR fan film crowd-funding initiatives will debut immediately after the holidays, according to the grapevine (and also because I’ve counseled them). And, of course, when they do, I’ll do all I can to assist promote both of them.

So this may be my final (for a while) opportunity to beg for assistance with these other current efforts, as well as my own blog. As a result, I’ll mention a couple for you, and if you’re able and feel like contributing anything to any or all of them, remember that every little bit helps…

TEAM AVALON’s current GoFundMe campaign has earned enough money (so far) to pay the expenses of COSMIC STREAM and AGENT OF NEW WORLDS, two fantastic fan films that were produced this year. However, they still want $7.5K to finish their next two shows. Have you heard of the phrase “too big to fail”? Avalon Universe fan films, on the other hand, are “too fantastic to fail”! Please assist them in continuing to make more for us…

Is Jonathan now endorsing superhero fan movies? Not at all. However, the new FARRAGUT FORWARD Star Trek fan series will be directed and produced by JOHNNY K. of KAOTICA STTUDIOS. Before that, however, Johnny is crowd-funding THE OATH – A Batman Fan Film…set in the MICHAEL KEATON bat-verse and set right before the 1989 TIM BURTON reboot film. Johnny opted to set his target at $3K, despite the fact that the film’s true cost is closer to $6K (he didn’t want to ask for too much). He did, however, achieve his objective in less than a week! The only issue is that people have stopped contributing now that they believe he has reached his goal!!! We don’t want Johnny to run out of money BEFORE he gets to Star Trek, thus giving to this film is sort of like donating to Farragut Forward, since we don’t want him to run out of money BEFORE he gets to Star Trek!

NEUTRAL ZONE STUDIOS, located in Kingsland, Georgia, has a complete range of immaculate TOS sets available for fan filmmakers to shoot their productions. DREADNOUGHT DOMINION, TALES FROM THE NEUTRAL ZONE, AVALON UNIVERSE, and a slew of other fan series make advantage of these great sets to create outstanding fan films. The sets, on the other hand, are housed in a warehouse that costs several thousand dollars a month in rent and electricity. While owner RAY TESI is covering the majority of the expense out of his retirement funds, the more people who give, the longer these sets will be saved from the trash. Supporters may pay on a regular basis or make a one-time donation via Patreon.

The annual BJO AWARDS are the Oscars or Emmys of the Star Trek fan film world. The Bjo Awards were formerly awarded each year in person at the TREKLANTA conference in Atlanta, GA; however, since that convention has gone virtual in the last two years, the next Bjo Awards will be presented live on Saturday, December 11 at Neutral Zone Studios in Kingsland, GA. But those plaques don’t pay for themselves (nor do the shipping fees for those who can’t attend in person), so Treklanta Chairman ERIC L. WATTS pays for them out of his own pocket every year! If you value Eric’s contributions to the fan film community, consider donating $1 or $2 every month (hardly visible, right?) to assist him out.

Where to Watch The Chosen Online? Is It on Netflix, Hulu, Prime, or HBO Max?